Why o why did you become a musician/guitarist, bassist, singer ....

Might not interest all, but interests me for sure.

I’ll write mine this week sometime. I’d love to hear your stories of what kicked you off in the wonderful world of music - and guitar!!

Joined Mar 7, 2007
·
11,247 Posts
My first real education besides public school, was church choir, formal voice lessons, private piano lessons, complete with recitals, weekly services, summer camps, musical theatre, and the family culture of singing and playing. Feeling somewhat screwed out of high school music by living in a small town with one high school and NO music programs, I took up guitar (father wouldn't let me have drums...I just wanted to hit stuff) on my own, applying my music theory knowledge to the fretboard. Somewhat casual at first, I got serious when I realized I could easily sing and play at the same time and jam with friends.

My first job out of high school was in a regularly working dance band. Band after band, until...then came love, then came marriage, then came baby in a baby carriage. Along the way I took day jobs, then quit playing out, but in a few years I was back at gigging again. Again, band after band, gigging around the day job obligations (I'm a lousy career guy), until...unemployment. I floundered for a while, juggled a few bands, did some pick up work (gardening, carpentry...) then thought I should return to my roots. Private music lessons, this time I'm the instructor. It'll soon be 20 years being self-employed in this business. A couple or a few more years and I'll retire. No regrets really, other than I should have started teaching 20 years earlier.

My parents vetoed the drums i desperately want(ed) so i took guitar lessons on a rental and they bought me my own. That was august '99.

Somewhere in my teen years I wanted to play live to make music that connects with people, and then get out there and connect with them.

Joined Oct 17, 2017
·
129 Posts
I always thought it would be cool to play. I watched the music videos for all my favourite bands, and saw how they all looked standing there mashing strings..
Then some time in my early teens I bought Siamese Dream by the Smashing Pumpkins(not everyone's cup of tea, but it's what I connected with) and some of the songs blew my mind. They seemed so raw, and made me realize that music could be more than loud noise or something to bob your head to, but it could also be a powerful method of communicating emotion.
I worked my ass off for a summer and saved all my money and bought a Fender Strat, and a Fender Champion 110.. and set off to try and learn these songs that touched me on a level no other music had at that point in my life. I also quickly realized that they were well beyond my beginner skill level, so my focus shifted to easier material like most nirvana songs, and punk rock.
Unfortunately I never really progressed much further than that. Now my taste has shifted entirely into more modern metal, which is also beyond my ability.. which has prompted me to actually set more focus on learning guitar, instead of learning songs, for now.
I should revisit those songs that originally got me started...
M 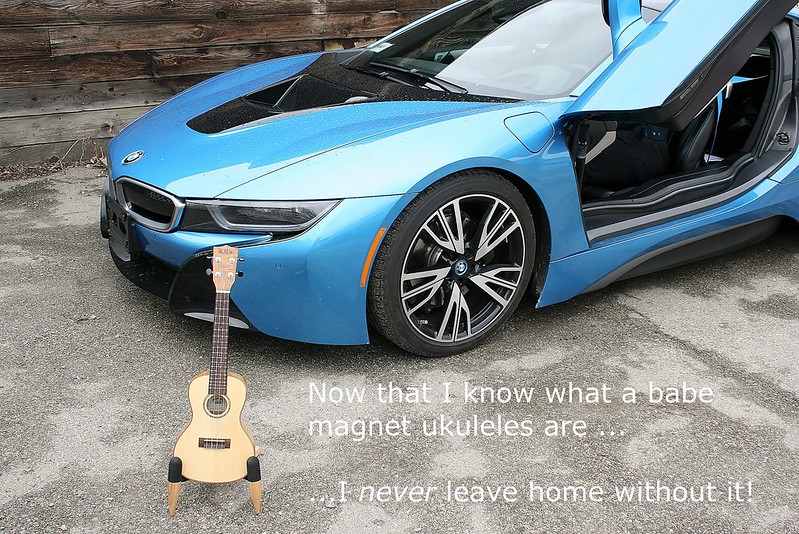 Joined Aug 8, 2014
·
1,553 Posts
A bunch of my buddies in high school all played. There was always a guitar laying around so I guess I just picked one up. I lent one of the guys my leather jacket and he lent me a cheap ungrounded amp and sticker cover LP copy. No turning back!!!!

Joined Jun 2, 2008
·
5,590 Posts
Guess I had a love of music from an early age. The family albums are loaded with pictures of me holding toy guitars right back to pre-school ages. Not sure who to blame it on. Billy Joe Royal? Gary Lewis & the Playboys? Paul Revere & the Raiders? Beatles? Monkeys? Or was it one too many Elvis movies? Anyway, when a music school set up shop in town, my older brother and I started guitar lessons. I stayed with it, did fairly well, won some local music competitions, started jamming and that turned into gigging. About the time we were just nicely getting established in the bar band scene, we all went our separate ways. I see the bass player around still, the rest I've never seen or heard from again. Did a duet thing for a while covering Jim Croce tunes, and I've been playing with myself ever since then.

Joined Dec 20, 2007
·
10,418 Posts
I had a friend that had a guitar, and it seemed really cool, and I was really into guitar driven rock/ hair metal at the time.
I became a singer as well, because it was so goddamn hard to find singers to join our bands...it was originally meant to be a temporary thing, just so the songs wouldn't seem as boring to play without a voice. then I just got better at it, and found demand in other bands as a singer. but my voice really couldnt hold up to a full setlist of screaming.

But what pre-dates all of this is, Mrs. Mahoney.
She was my 2nd or 3rd piano teacher at the RCM, when I was about 8-9. Totally milf-y...warm, supportive with a beautiful voice...and beautiful D-cups...I know because I always remember the day she wore a see-through blouse with no bra underneath. I couldn't concentrate on my lesson at all.
Piano wasn't for me, but I knew I always wanted to be around that.

The reaction of the two other guitar players sums it up nicely for me. For reference, they were all jamming a bit with each other's songs, but the respect they showed for this song says everything to me. An iconic riff that, IMO, started many a guitar players interest, and possibly career.


Of course, I also thought if I could play this riff up on a stage with a band, I would bet noticed. Especially by chix. Ultimately, that has to be a significant factor for so many things young males do.

JB Custom
Joined Feb 12, 2014
·
1,883 Posts
I grew up in a fairly non-musical family. They didn't listen to music very much, or with any degree of passion towards certain styles or artists. Just background stuff while driving. My Uncle was in a metal band and always gave me demo tapes, which I listened to and liked. He was the "cool" uncle.

When I was 14 I heard the notes B-F#-B-D in succession and I was hooked (One by Metallica). I'd never heard anything like that ever before and wanted to be able to play it. Watched their black album documentary (Year and a Half In The Life Of Metallica), and James Hetfield became my idol. There was a time when I could play literally every Metallica song from Kill 'Em All up to Reload. By 2001-2002 I had begun listening to a variety of other styles and grew out of love with metal, but still love me some heavy riffage in the right moments.

Joined Sep 30, 2015
·
2,511 Posts
I've always had some interest in music, but never had learned to play anything. About 13 years ago, I picked up a classical guitar while living in Mexico and learned a few chords. Then, a few years back, I decided I wanted to learn "for real" and got a new acoustic, then an electric. Then I started browsing forums. Now I have many guitars.

jdto said:
I've always had some interest in music, but never had learned to play anything. About 13 years ago, I picked up a classical guitar while living in Mexico and learned a few chords. Then, a few years back, I decided I wanted to learn "for real" and got a new acoustic, then an electric. Then I started browsing forums. Now I have many guitars.
Click to expand...

This (or at least part of it) should be a disclaimer at the start of all guitar forums. Probably all equipment forums in general.

In the summer of 1978, our next door neighbour gave me her son's old Raven Les Paul - he had moved out and gotten married and took his good guitars with him. She gave me my choice of the two he had left behind. I suspect that I chose badly, but I'll never know for sure. It also came with an amp that I'm pretty sure was built from a kit.

That fall, my parents signed me up for lessons. I actually practiced, so before long my teacher talked my parents into buying me a better guitar - a used '78 Fender Strat that I still have - and amp - a Yamaha G30-112 that I also still have.

When I was fifteen, I went away for a summer job and really missed my guitar, so I bought a new '81 Takamine acoustic to take with me the next summer. That summer I got tired of playing the first eight bars of 50 songs, so I started to work on singing. I would play the melody on my guitar and then try to match the notes with my voice. I didn't know it at the time, but I was a baritone, so most songs were out of my range, but eventually, I could at least carry a tune well enough for around the campfire.

In my third year of university, I actually started having conversations with my friends that weren't centred around either school, beer, or women and found out that quite a few of my friends played. We eventually decided that jamming 'til the wee hours in the living room was way more fun than hanging out in dance bars in the vain hope of getting picked up. During the last two years of University I learned a tonne of songs - or at least the gist of them - and sang a lot. It was all pretty sloppy, but we had a ball.

Guitar took a back seat for several years of apartment living, but after getting married and then buying a house a few years later, I got back into it a bit and joined the Worship Band at our church. When kids arrived, we decided that I would stay home as my wife had a great job with normal, predictable hours and good benefits and I was self-employed as a freelance audio-visual technician. I didn't have time to play with others, so I started working on fingerstyle while the kids were napping. My guitar teacher had taught me a bit of fingerstyle, but at the time, I was more interested in playing power chords - but the fundamentals of playing fingerstyle (and about 3 tunes) stayed with me.

Shortly after my daughter was born, three people I knew approached me, all in the same week, wondering if I would consider teaching guitar. I took the hint and started teaching one evening a week. Once my youngest was in school, I transitioned to teaching during the day and I now teach three days a week and I am seriously considering teaching a fourth day next fall.

Last fall, I took over hosting a local open mic, so now I get paid to sing too! Also, this past winter I took on a gig playing instrumental fingerstyle tunes for Live Music Yoga and it has resulted in three more bookings so far.

Right now, music is my only source of income. I'd be pretty hungry if my wife didn't have a good job, but the the hourly rate is pretty good and I have a lot of time for household chores, etc. so it makes for a pretty good part-time job.