Joined Jun 9, 2018
·
81 Posts
Ok so today I decided to take a trip into town to get my sons birthday present setup ( a BNIB 2015 Les Paul Custom "100th" Anniversary). so as soon as I walk through the door a friend of mine who works there come over and mentions that while England are in the world cup there is 30% off all 2nd hand gear, I laugh and tell unless theres a PRS for silly money I'm not interested. His reply is that theres a S2 Singlecut satin in perfect condition and after discount its £540 so we go over to have a look, as we get there he says "Oh yeah I forgot we've also got a 2001 McCarty thats almost mint". we get there and the S2 is beautiful but I'm not a fan of the pickguard, then I see the McCarty, within 2 mins she's paid for and in with my tech who works out the store.

I already own a 2015 McCarty so it interesting to compare these 2.

My review of my 2015 McCarty
As soon as I played I knew there would be more Core models coming my way.

This was my first PRS CORE guitar and I'm over the moon with it. It's a brand new NOS 2015 McCarty model. It weighs just under 8 lbs. (Patter) Wide fat neck carve that's very nice but neither really wide or fat.

I know a lot of people out there rave over PRS's “10” Tops or Gibson's super rich “Flame” tops but to me if a guitars top looks to perfect then it can end up looking like a veneer or worse a photo flame decal. I like my tops to have a bit of personality to them.

On the McCarty the Black Gold Burst finish reveals stunning golden highlights in the figured maple top, while the ivoroid bound fretboard wears nine “birds in flight” inlays of pearl and abalone. The rosewood faced headstock sports “McCarty” on its trussrod cover and on the flip side are a set nickel-plated Phase III locking tuners with exposed brass gears and aluminium keys.

This machine is a real dream, she almost plays herself, the fit and finish is way beyond anything the other 2 major firms put out. The neck feels like it was shaped for my hand alone, and everything just feels "right"

She is the most acoustically lively guitar I've had my mits on, vibrates like crazy and has a very bright and airy tone, the 58/15's sound amazing, sweet to spanky clean, mean to scream...handles gain like nobody's business. and I really cannot find a fault with her. (her name is maria after the most beautifull and caring woman I have ever known)

While all of the above still holds true I find that in some ways I prefer the 2001 McCarty. As with 2015 she almost plays herself, the fit and finish is way beyond anything the other 2 major firms put out, again she has a very mild flame that find nicer than super book matched maple. here are a few differences

Headstock = The 2001 has a thinner headstock front to back with classic style tuners, I think this really suits the overall look of the guitar dedicated to a man who presided over some of the greatest guitars of the 50's & 60's

Pickups = I love the 2015's 58/15 humbuckers but god the McCarty units just blow me away. I can get the guitar to go from dark and dirty to bright, smooth and silky depending on what I do with the vol/tone pots. The push pull coil split gives some nice single-coil options, on top of the those excellent HBs, Lots of natural sustain on this beauty, which comes just as much from the quality of woods, design and finish, as from those tasty pickups.

Don't get me wrong I still feel the 2015 version is one of the I've ever played but the 2001 just feels more vintage all round. 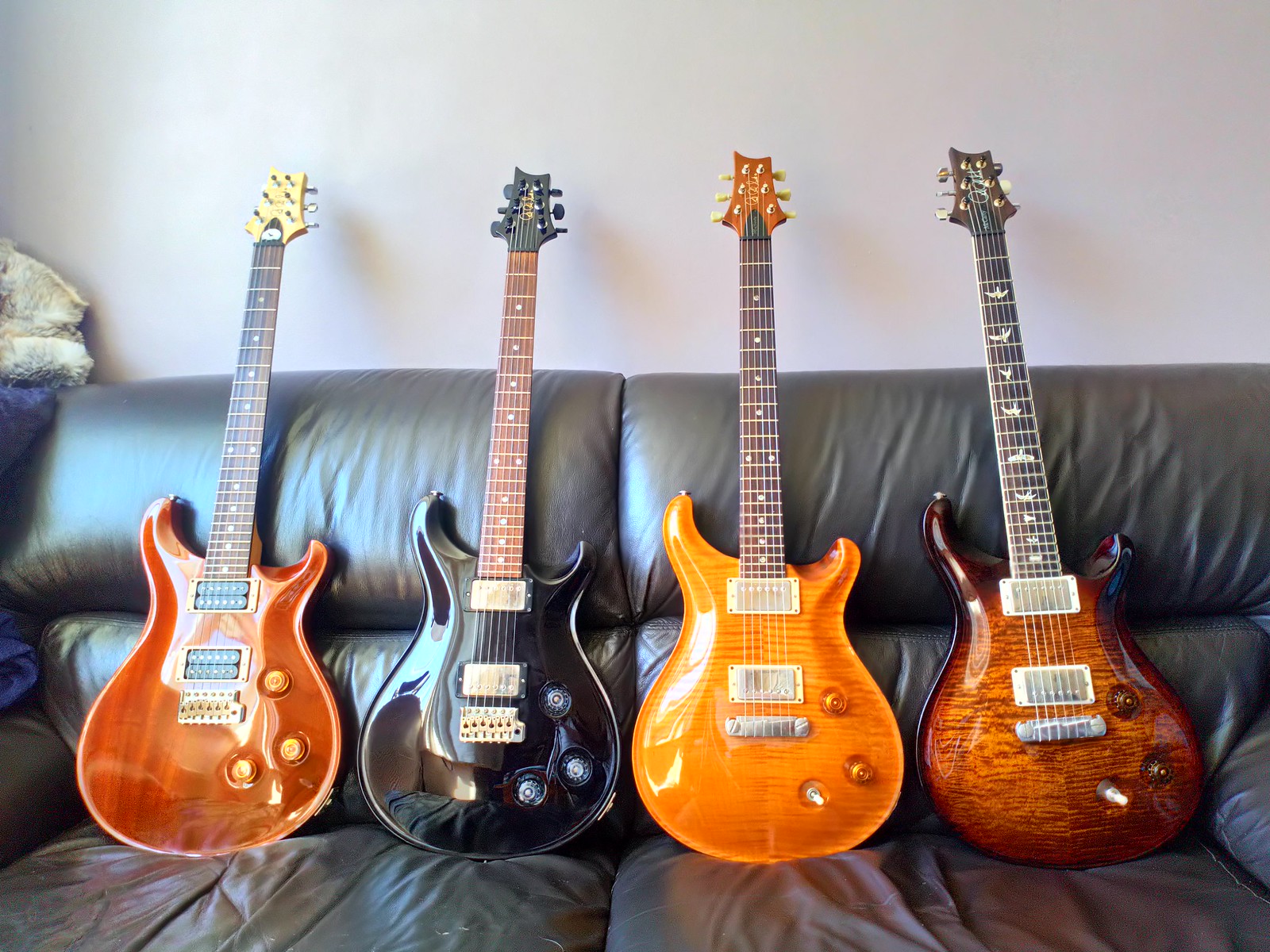 Joined Jul 28, 2008
·
2,867 Posts
very nice collection! congrats!
maybe in 2026 when Canada's only chance to get in the World Cup is the bye...maybe we can score deals like that
1 - 9 of 9 Posts
Join the discussion
Continue with Facebook
Continue with Google
or sign up with email
About this Discussion
8 Replies
9 Participants
Last post:
ezcomes Jul 4, 2018
The Canadian Guitar Forum
A forum community dedicated to guitar owners and enthusiasts. Come join the discussion about collections, displays, models, styles, amps, modifications, kits, reviews, accessories, classifieds, and more!
Full Forum Listing
Explore Our Forums
The Open Mic (Non Music Related) Electric Guitar Amps and Cabs Music Effects Pedals, Strings and more
Recommended Communities